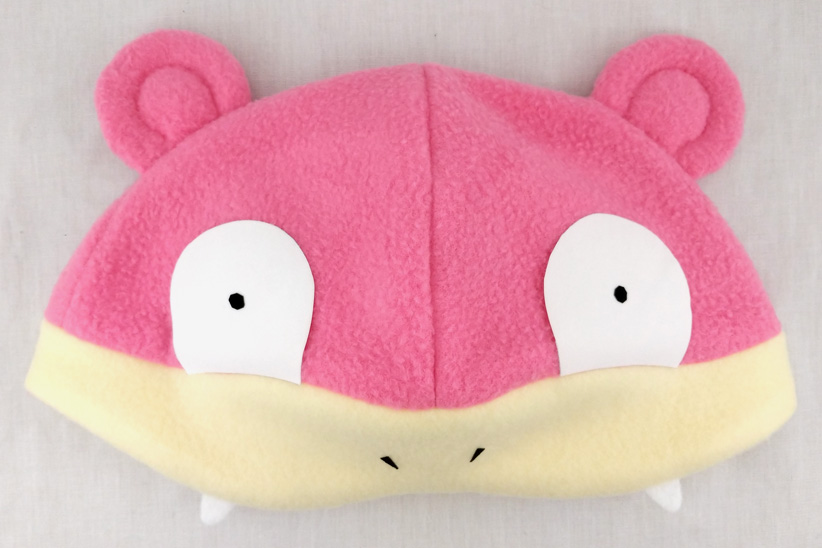 Slowpoke is everyone’s favorite derpy pink gen 1 Pokemon. Download the free pattern and make your own Slowpoke hat to wear on those days you’re feeling extra listless or carefree. Hopefully you won’t procrastinate finishing it as badly as I did.

The PDF pattern is multi-page and designed for printing on US Letter sized paper. Larger pattern pieces may be split across pages. Use the cut marks in the corners of the pages to help you cut away the print margin and then tape the pieces together.

The SVG pattern is arranged in a continuous sheet for easier editing.

The fleece list includes particular colors and vendors I used to make the photographed hat. You are free to substitute any color and vendor of your liking.

The Pico Textiles fleece is a fairly thin lightweight fleece, and the Joann anti-pill is a medium-weight fleece. Note that Joann has discontinued their original line of anti-pill fleece and replaced it with a plush variant, which is even thicker and with differing texture. Pico Textiles Butter Yellow would be a close color substitution.

Pale Banana is the closest match I could get to the sandy color of Slowpoke’s mouth.

StripFlock is a fuzzy iron-on vinyl made by Siser, but you can use sheets from any vendor if you can find them. Flock is used for facial features like eyes.

Gluing or sewing craft felt or fleece layers is an option that can be pursued in place of flock, but flock will provide the cleanest finish.

Stuffing the tail with a small amount of poly-fil will help keep Slowpoke’s tail from falling to the side, but this is optional. White craft felt is used for Slowpoke’s teeth.