Last week my friends asked if I wanted to go to the “HAM swap” and then check out “the radio museum”.  To be honest I wasn’t that excited about the prospect.  HAM swaps or fleas are where you go to spend too much money on Pentium II desktop computers and burned-in monitors.  And I don’t need the extra junk.  I also haven’t exercised my HAM license in the last 15-ish years, so I didn’t really care about looking at a bunch of old radios either.

Fortunately, my imagination proved to be wrong on this occasion.  The swap meet took place at the Vintage Radio and Communications Museum, located in Windsor, CT.  It’s just a little bit out from the main airport, Bradley International Airport.  The museum itself is in a nondescript brick-faced building off the beaten path.  It would be easy to mistake for a small warehouse, machine shop, or old line engineering firm.  That’s perhaps fitting for what’s contained within.  The museum was hosting the swap, and since we’re into the winter months now, the swap took place inside, with folding tables of various contents-for-sale mixed in between the aisles of exhibits.  Initially it was hard to tell that these weren’t all part of the same big collection.

I didn’t intend to spend any money, which I stuck to.  As I said in our planning conversation, “I don’t plan on buying shit”.  There’s at least 3 ways to interpret that statement, and they’re all correct.  I was just there to look around.

As an aside, for the past couple years I’ve been attending MAGFest (as I sometimes reference in this blog), and one of their areas is the computer museum.  It’s a lovely space decked out with old PCs, Macs, and beyond, ranging from the ancient to the not-so-distant past, mostly loaded up to play equally old games.  You can also find some other odd bits of history and technology mixed in to enhance that museum quality feel.  If you could imagine expanding the MAG museum’s to include more A/V and telecom history, then stretch that back to 1890, you end up with this place.

The Vintage Radio and Communications Museum, or “the radio museum” does indeed have many radios on display, going back as far as those devices have existed.  But they also have some other neat, old tech on display.  They have displays of telegraphs, original (and later) telephones, phonographs, early film projectors, radio transmitters and receivers of all ages, telephone switching equipment, general electronics, the evolution of Hi-Fi and stereo, televisions, video recording and broadcast, and an assortment of old computers that would feel right at home at MAGFest.

Everything in the museum is grouped approximately by the decade it was developed in, with large signs hanging from the ceiling denoting this timeline.  By the time you reach the end of the timeline, somewhere in the 1980s, you might even recognize some stuff you grew up with, or heavens even still own.  Were YOU cool enough to own a Sony Watchman?

The museum is run by a volunteer organization, and on any given day that they’re open, numerous volunteers are prowling around to give guided tours or just explain a piece of technology.  One of the really neat things about this museum is almost nothing is roped off or behind glass.  All the equipment is on display and generally there to see and touch.  And a lot of this equipment, some of it over 100 years old, is in working condition and the volunteers will happily do a live demo for you.  One volunteer approached us while we were looking at some old phonograph console cabinets, which look like a turntable on top of a large wooden speaker cabinet.  The speaker however, though hidden from view, is actually a large horn, like the ones you imagine when you think of old-timey phonographs.  After describing a bit of this cabinet to us, he started playing a shellac record from 1925.  What really struck me about this demo is that there is no electricity involved.  You give the handle on the side a few cranks which is enough to spin the record through the duration of the song.  The enormous phonograph horn hidden behind the cloth fabric of the cabinet is enough to amplify whatever the needle picks up off the record with plenty of volume.  Maybe the fact that I couldn’t see the horn and it looks like it should be an electric speaker is what gave it that touch of witchcraft magic.  By the way, Shazam had no trouble recognizing that record (but I forgot what it was already, sorry).

Another demo we were given was on a 1920s tube raido receiver, which can receive AM radio bands.  AM radio has apparently gone unchanged, as the volunteer was able to tune the radio to a local station, which was broadcasting a story on the death of President George H. W. Bush.  It was bizarrely fitting, perhaps eerie even, to be listening to this broadcast on the same radio that might have been informing someone about the death of President Warren G. Harding.  That’s pretty incredible.

Not everything needs to be done by the volunteers; some of the exhibits can be played with directly as well.  One of the exhibits, in the “1940s” section, is a huge multi-rack of AT&T telephone switching equipment.  It’s more of a solid wall of wires, eletronics, and egad knows what.  Did you know that when the North American Numbering Plan was developed, area codes were distributed such that the busiest metro areas (like New York) would have the lowest digits in their area code, which would require the fewest number of “clicks” on the switching equipment, and actually be faster to connect than numbers in area codes with higher digits?  New York has area code 202 (among many more today), which was the shortest, fastest code that could be assigned under the plan.  This was life working with mechanical constraints!  Back to the museum display though, they have one of those central office “mechanical switches” on display, next to a rotary phone dial that visitors can use.  Each number on the rotary dial creates the same number of pulses (except 0, which is located after 9 and has 10 pulses).  Each pulse causes a mechanical movement in the switch, which you can see.  And two “digits” must be entered into the switch to complete a connection.  I have no idea how any of that really works, but it looks complicated as hell and someone had to engineer those systems and all that hardware.

Like the phone rack, a 1970s display includes a collection of VHS broadcasting equipment that has clearly come from a local broadcasting station that was decommissioning pretty much everything.  The interesting bit about this display is the equipment looked shiny and new, like it had only recently been pulled out of service.  And indeed, there were visible service tags for maintenance/replacements for the years 2005 and 2007.  I suspect that this equipment was in active use until 2010, when the venerable analog NTSC broadcasting in the United States was shut down.

There’s all kinds of strange and interesting things threaded throughout the larger themes of the museum.  Artifacts and notes are strung up just about everywhere like the walls of a 99 restaurant, except it’s all real.  Did you know that in the 1930s, a company started selling refrigerators with a built-in radio?  The radio took up the entire top section of the refrigerator, which you would otherwise have assumed was the freezer.  If that sounds crazy, they sold 4 million of them.  It turns out that such a combination was a big hit for lonely housewives working in the kitchen all day.

If you’re in Connecticut near Bradley Airport and have some extra time, it’s worth taking a visit.  General admission is $10, although if you go on a swap meet day they might not charge you.  We didn’t have to pay today.  We took about 2 hours to wander around and look at things.  We didn’t have a full tour, but those are offered and would probably be very interesting with all the extra knowledge and backstory that the volunteers can provide. 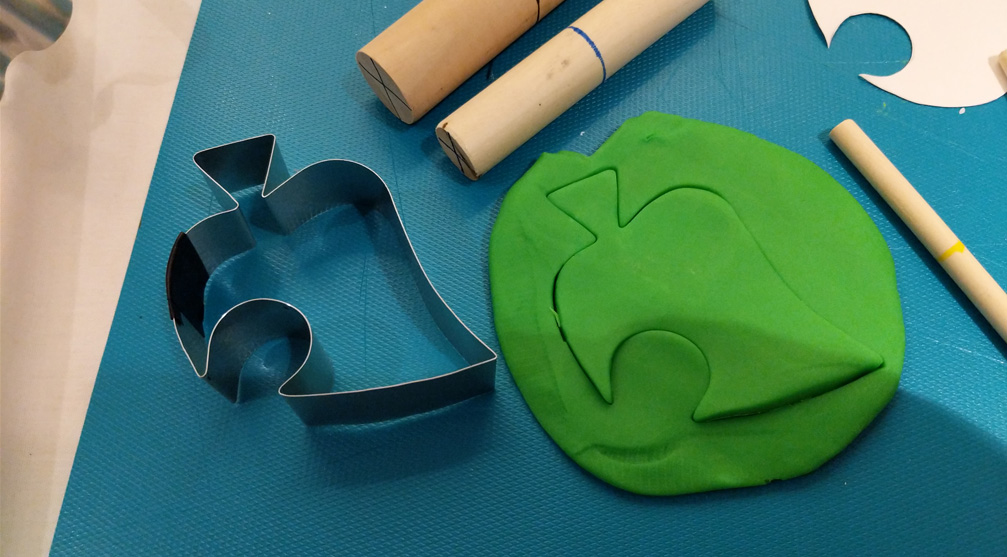 Whew, I’ve been so wrapped up with other projects I forgot to recap the cookie cutter workshop I ran at MAGLabs in September.  This was the first workshop I’ve run, and it was an absolute joy to come share this fun little craft project with others.  Thank you to everyone who attended!

I was quite happy with how everything went, and the creativity of some attendees who created their own designs and patterns – then built them!  I also received some good feedback on improvements I could make if I run this workshop again in the future.

And speaking of future workshops, here’s a soft announcement that the cookie cutter workshop is coming to Super MAGFest this year!  I’m super excited to bring this to the big event.  The workshop will be running on Friday, January 4th, at 7:00 PM in the maker space (formerly the Forge).

I haven’t posted any of the instructional content I mentioned yet, but I’d like to do so before the workshop runs, so that the resources will be available online for everyone.  In the meantime, here’s a link to the instructional sheets I handed out as part of the workshop, which includes a collection of pre-made patterns and some additional information like a pattern key and a bend radius guide: