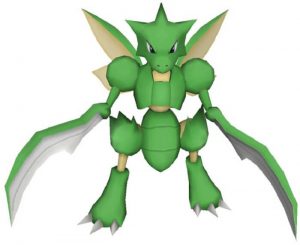 I’ve been continuing to make progress on a Scyther cosplay, and I’ve been doing some work on the feet.  If you’re a bit rusty on your Pokemon designs, Scyther has some pretty large feet attached to his little stick legs.  Since I’m designing my costume to be faithful to the Pokemon X/Y model that I’m using as a reference, that means making feet that are also much larger than a normal shoe or boot.

The idea is that the foot is built as a shell with some normal, wearable footwear embedded inside.  Ideally, I’d like to be able to wear some normal shoes which would provide very secure attachment and at least be moderately comfortable.  But if I glue shoes to the inside of the shell, I can’t really get access to lace and unlace them.  So what to do?

Early on, I got the idea to try attaching the shoes to the inside with magnets.  Specifically those strong rare-earth neodymium magnets that feel impossible to separate when two get stuck together.  The idea is pretty simple: take a relatively flat shoe, embed several magnets in sections that are normally in contact with the ground, and embed another set of magnets in the same location in the base of the foam Scyther foot.  Then you can lace up your shoes, stick your foot inside, and the magnets should engage.  Now the rest of the foot will move when you do.

I made a first attempt using some small 10mm magnets, which you can see in this photo. 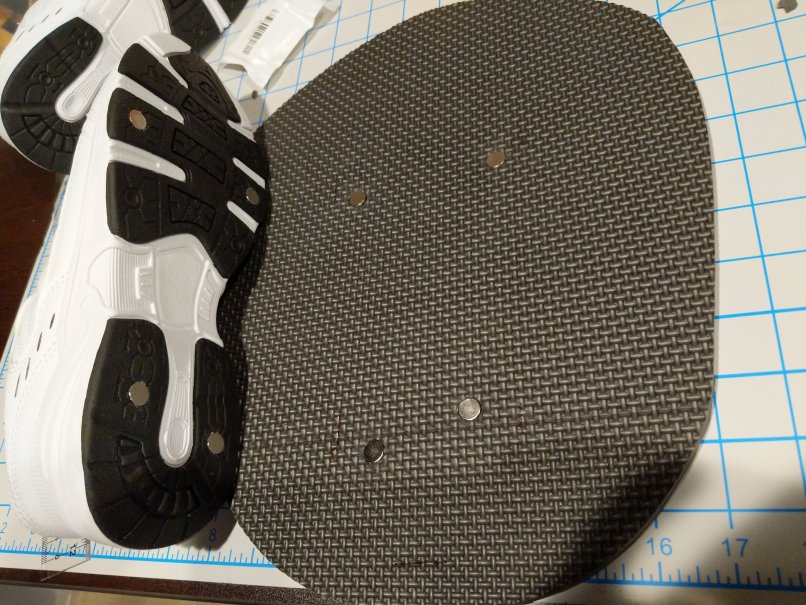 Unfortunately the attractive force wasn’t that strong.  Any resistance on the foam bottom would cause the shoe to disengage, as well as any flex in the foot from walking.  Flex is something I did consider, but thought would be minimal since wearing these feet will be like wearing flippers.  Still, there’s enough to be a problem.

I did a second test with some larger 20mm magnets.  That should work out to 4x more attractive force overall.  It was an improvement, but in a test walk the foam bottoms were still detaching all the time.  Maybe I could keep adding magnets and find a break point where the attachment is reliable enough, but I think I’m ready to lay this idea to rest.